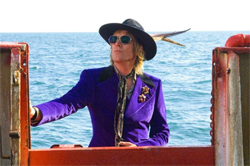 I have come here to chew bubblegum and be awesome...and I am all...out...of bubblegum.

Quentin: Ah, young Carl.
Carl: Yes.
Quentin: My favorite godson!  Have we met before?
Carl: I don’t…think so…
Quentin: No…there was a lost decade, so I always have to check.

It’s 1966, and in order to keep him out of trouble, Carl’s (Sturridge) mother sends him to live on a boat with family friend Quentin (Nighy).  This particular boat happens to be a pirate radio station parked off the coastline of England, broadcasting Rock & Roll since it is against the law to do so within England.

Apparently a bunch of great songs does not add up to a great movie.  It adds up to an okay movie, but not a great one.  This is like Almost-Famous-light.  You’ve got a young man getting thrust into the world of Rock & Roll, an odd assortment of older adult characters teaching him the ropes, groupies, music, etc.  The big difference is that this movie doesn’t seem to have any real clear focus or purpose (beyond “Rock & Roll is coooool!”), and it feels like a more cartoonish depiction of the time rather than having any real authenticity.

The villains in the story are, of course, the British lawmakers who want to do away with vile, disgusting Rock music once and for all.  The Darth Vader of this group is Alistair Dormandy (Brannagh), who spends the whole movie trying to figure out a way to shut down the floating radio station.  He’s the stereotypical, stuck-up, no fun British type that seems more appropriate for a TV comedy sketch rather than an actual movie.

In fact, there’s a few scenes that seem like sit-com humor, which adds to the ho-hum feel of the entire movie.  There are a few good comedic moments, and a few instances where you might get caught up in the fun excitement of Rock music, but overall I found myself just waiting for it to finally be over.  It wasn’t an agonizing wait, but it wasn’t really a fun one either.

At least the wait had a good soundtrack…

Rock is cool…anything not Rock is, like, totally square…

mmmm, I could eat stamps all day!

Max: When I was young, I invented an invisible friend called Mr. Ravioli.  My psychiatrist says I don’t need him anymore…so, he just sits in the corner and reads.

A lonely little girl in Australia starts up a pen-pal friendship with a lonely, Asperger’s Syndrome suffering man in New York which lasts for many years.

Don’t let the fact that this is a claymation movie fool you, it’s not exactly for kids.  There’s a lot of dark stuff going on here, including several deaths, alcoholism, and a near suicide.  It makes for much more serious fare than a similarly animated movie like Chicken Run, but it’s so dark at times that some of the sweetness and humor gets overshadowed.

There are funny bits, and the end is very touching, but getting there was sort of a battle for me.  It’s all just SO dismal that I got a little worn down by it.

Still, I have to respect the artistry of it.  Mary (voiced by both Whitmore and Collette) lives in a world that made up mostly of shades of brown, whereas Max (Hoffman) exists in a very gray New York.  When Mary sends Max an object, it always brings that warmer brown shade into Max’s cold existence.  While all these uses of color are interesting, it certainly didn’t help alleviate the dismal tone.

The voice work is good too, especially by Hoffman.  I didn’t recognize his voice, even though I knew it was him talking.

So yeah, animation is good, voice work is good, tone is dismal to the point of exhaustion.  I liked it to an extent, but I can’t imagine I’ll be watching this one again any time soon.

You never know where you might find a friend.

10 – 3 because it’s just so exhaustively dismal – 1 for actually having a fairly standard/predictable story + .1 for the touching ending = 6.1 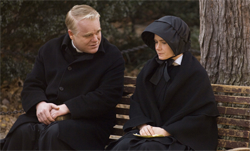 should I make another "habit" joke? 'cause I will if that will cheer you up...

When a teacher at a Catholic school, Sister James (Adams), observes some odd behavior from one of her students, as well as from Father Flynn (Hoffman), who has taken a special interest in the boy, she reports it to the head nun, Sister Aloysius (Streep).  Sister Aloysius does everything she can to unveil whatever wrongdoing may have occurred.

This film got a lot of attention at Oscar time for the performances by the 3 main leads.  I agree that 2 out of 3 of them were deserving.  Streep and Hoffman are both great, while Adams, though not bad by any means, seemed a little one note and not as believable.  It might have more to do with the character than the acting, but either way, she didn’t interest me as much as the other two.

The story is an uncomfortable one, involving a possible improper relationship between a Catholic priest and an altar boy, and the movie dances all around the topic without ever getting into specifics.  I guess that might be a product of it being set in 1964.  Perhaps people back then wouldn’t talk directly about such things, especially in a church setting, but it still seemed like the movie was holding back a little considering the serious nature of the subject matter.

As horrible a subject as it is, the story alone isn’t all that compelling.  It’s the scenes between Streep and Hoffman that really drive the movie.  Despite them, though, the movie loses a little steam at the very end.  It seemed like it was building toward something bigger, but I guess it wouldn’t be true to life to have a big over-dramatic ending.  People move on, run away from their problems instead of facing them, and leave a wake of discontent in their past.

I liked the movie, and would recommend checking it out for the performances, but it seemed like it was a lighter movie than the subject matter would suggest it be.  Maybe it needed to be lighter in order to have more commercial appeal, but I think by doing that, it lost some of the potential emotional impact.

Nuns are a tricky lot. 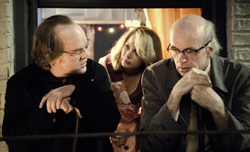 ok, this is getting weird...

Dr. Eisenberg: The eyes are part of the brain after all.
Caden: Now that’s not true, is it?
Dr. Eisenberg: Why would I say it if it weren’t true?
Caden: Just doesn’t seem right…
Dr. Eisenberg: Like, morally incorrect, or right as in accurate?
Caden: I dunno…accurate…I guess.
Dr. Eisenberg: Interesting…

Wow, where to begin…?  Caden Cotard (Hoffman) is an unhappy director/playwright with a myriad of health problems and a rapidly decaying marriage.  His wife goes on a month-long trip to Europe with their daughter, but never returns.  As he copes with this, his health, and the problems he experiences with the new relationships in his life, he gradually creates a new play bigger than anything ever made before.  This play is to take place in a life-sized neighborhood built in a gigantic warehouse.  It involves hundreds of actors playing all the people in Caden’s life, but since his life is constantly changing and going on longer, the play is constantly changing and can never seem to be finished.

I know that this movie will not appeal to a lot of people.  In fact, I bet some people will absolutely hate it.  I didn’t love it, or even particularly like it a great amount, but I’m glad I watched it.  It’s a wholly original venture into obsessiveness, loneliness, and self observation.  I think…

I laughed quite a bit in the first 10-15 minutes of the movie, but then it started getting darker and more uncomfortable, before eventually transitioning into strange and bizarre territory.  For instance, one character, Hazel (Morton) purchases a house that is on fire while she views it, and it remains on fire for the extent of the film, even 30+ years later.  I’m sure there’s symbolism of some kind there, but I’m not brave enough to venture any guesses at what it is.

There are moments of poignant observation hidden throughout the 2+ hour running time though, especially in the speech that Dianne Wiest’s character gives near the end.  There’s some cold, hard truth there about life and death that a lot of people don’t like to think about.

I would have to say that I like the IDEA of this movie more than the movie itself, but there were still some genuinely funny and touching moments throughout.  You’ll just need some patience to get through all the other confusing moments in order to enjoy the better moments.

Joseph: Do you like kids?
Ann: …I never saw the point of ’em.
Joseph: Me too…

Eh, so I lied, it’s not that hilarious.  It’s amusing at times, but not hilarious.

It would seem that the writer, or writers, thought it’s automatically funny to have multiple people having various, fast paced, angry conversations all overlapping each other.  I guess that’s supposed to be in contrast to the slow, small town life going on around them, but…big deal.

The only compelling aspect of the movie is Philip Seymour Hoffman’s character, plot-line, and performance.  He and Rebecca Pidgeon do a good job of easing their relationship along at a believable pace.  They’re also the source of most of the actual clever dialogue in the movie.

This movie could have fallen into hateful territory pretty easily for me, but it didn’t, so even if it wasn’t overly amusing or interesting, it wasn’t a chore to watch.  It’s just forgettable.