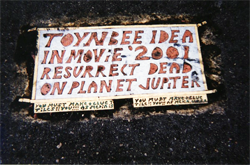 all these worlds are yours…except Europa…

This documentary is the story of 3 men trying to discover the origin of some mysterious tiles that appeared on the streets of Philadelphia – and then up and down the East coast – beginning in the early to mid 1980s.  Along with other random, cryptic text, the tiles all said, “Toynbee idea, in movie 2001, resurrect dead, on planet Jupiter”.  Certainly the kind of crazy talk that can pique a person’s interest.  Who is laying these tiles in the streets?  How are they doing it?  Does it matter?  Should I care?

Most probably wouldn’t.  Or, if they did care, they wouldn’t take the time to try to solve the mystery.  But, as is pointed out in the film, Justin Duerr isn’t exactly like most people.  He is driven to see things to the end, so once this mystery had him in its clutches, he wasn’t going to let it release him.

That’s what the movie is about on the surface, but like the tiles, there’s more lying below the surface.  What I found most interesting was how some people – or maybe all people – need a mystery or mission in their life in order to feel like they have a purpose.  The person behind the tiles has invented a great truth along with a sort of conspiracy which must be brought to the world’s attention.  Meanwhile, Justin Duerr has let the mystery of the tiles consume his life in a similar way.  It has given him a reason to be, which is something I think everyone can appreciate.

I like mysteries.  I like people that try to solve mysteries.  And I liked this movie.  It’s not an all time great, but if you’re interested in oddities, mystery, and amateur detective work, you might find it fascinating.

Oh, and never fear, the mystery is actually solved (for the most part), so you don’t have to worry about being left hanging.  In fact, it might feel a little underwhelming when you really think about it afterward.  The whodunit aspect turns out to be less surprising than the howtheydunit and whytheydunit aspects.  Though, the whytheydunit is still a little hazy.

It’s not monumental subject matter, there aren’t many holy-cow moments, and I was a little curious at times as to whether I was watching events unfold as they happened or if it was some sort of recreation of events, but all in all, I enjoyed it.

And hey, who knows, maybe one day I’ll see ya on Jupiter…