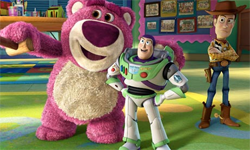 Hamm: C’mon, let’s see how much we’re going for on Ebay.

A bunch of toys mistakenly think that their owner has outgrown them and might be planning to throw them away.  They escape to a day care center where things are not as wonderful as they first seem.

When I started watching this movie, I realized something:  I have never really watched the first two Toy Story movies all the way through.  For some reason, the storyline has never really appealed to me.  And this is coming from somebody who generally likes Pixar movies.

It took a few minutes to take in all the characters and figure out what their relationships were, but once I got all that straight, I was able to sit back and enjoy the movie.  Maybe not quite as much as others have enjoyed it though.

I did like it.  In fact, it’s quite good, but still not up there with my Pixar favorites.

The thing is, I feel like if I had seen the first two movies a few times, this movie would seem a bit recycled.  Even with my limited experience with the first two, it all felt very familiar.  Same sort of jokes from the same characters, similar action scenes, etc.  It’s all well done, it’s just…tired.  In fact, the action/adventure stuff was the least interesting for me.  The comedic moments were much better.

The introduction of the day care was a good idea.  That opened the door for a lot more toys and crazy kids.

Still…it just never took me to the same kind of magical place/state-of-mind that something like Wall-E or Finding Nemo did.

Does that mean I’ve outgrown playing with toys?

P.S.  I was going to make a joke about the fact that Ned Beatty should have voiced the pig, but I’m sure I wouldn’t be the first to do that.

Don’t throw your toys away kids.  If you do, they will suffer a horrible, painful death.