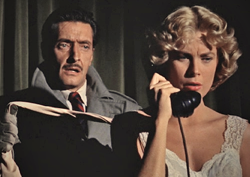 can I call you back, some guy's about to strangle me...

Charles: What makes you think I’ll agree?
Tony: The same reason that a donkey with a stick behind him and a carrot in front always goes forwards and not backwards.
Charles: Tell me about the carrot…

Tony Wendice (Milland) has planned the perfect murder, and enlists an old school acquaintance to carry it out.  Tony’s wife, Margot (Kelly), is to be the unfortunate victim, but the murder does not go remotely as planned.  Tony must scramble to cover his involvement, even if it means framing his wife for murder.

As I watch more Alfred Hitchcock movies, I have to wonder if he and his friends sat around discussing murder as much as the characters in his movies do.  You’d think that was the number one topic of conversation in America if you were basing your opinion on his movies.

Once again we have a character, Tony, who is convinced he’s smart enough to pull this perfect murder off.  The problem is, when he enlists someone else to do it, his control of the situation goes out the window.  Then he is left improvising a whole new scenario that will still achieve the desired result: his unfaithful wife being dead.

It’s fun watching the detective try to piece together the clues (some left intentionally, some not) while Tony tries to stay one step ahead of him.  There’s not a huge amount of action here, and not as many tense, suspenseful situations as most Hitchcock movies, but I still found it fascinating to watch the verbal cat and mouse games being played by the characters.  When the dialogue is well written, that can be just as exciting as any other suspense sequence.

The scene with the attempt on Margot’s life is pretty intense, but thankfully, she gets in the last laugh…or stab, I should say.