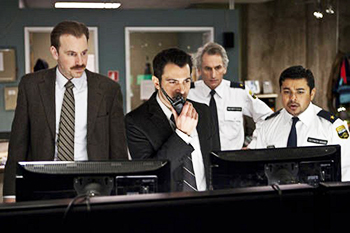 This M. Night Shyamalan written (and thankfully not directed), claustrophobic, light horror movie is actually fairly effective for the most part, though not really at being overly scary.  It’s more effective as a whodunit…or, whothedevil?

Thanks to some unnecessary narration, we know that the devil has decided to take human form and punish some people in an elevator.  What we don’t know is which of the five people on board the elevator is secretly the Prince of Lies.  Meanwhile, at a security desk, Detective Bowden (Chris Messina) is watching everything over a video camera and wondering what the heck is going on.

I’ve been debating with myself on this one as to whether or not it would be more effective if somehow the audience point of view never left the elevator.  Would it have felt more claustrophobic that way?  Long ago I did another trapped-in-an-elevator movie called Blackout that spent even more time inside the lift, and it didn’t effectively create much claustrophobia either, so…maybe I’m just not scared of getting stuck in an elevator.  Anyway, I actually like the bigger scope of the movie, as it includes several other characters being affected by what’s going on.  It felt more real to have police involved, a mechanic, security guards, etc.

Not a bad comeback effort from the guy that has been on a pretty big Hollywood losing streak.  Maybe writing and not directing is the winning formula for ol’ M. Night.  Believe it or not, I’m rooting for him to regain his former glory.  I liked his first few movies, even the Village, but everything since, not so much.

I wish I liked this movie more.  I wish the supporting characters hadn’t been so unbelievable.  I wish some of the situations and plot developments hadn’t felt so forced.  I wish it had more of an emotional core.

The central idea is a nice one – slow down, stop trying to chase material things and focus on bringing a little happiness into a fellow human’s life.   And maybe, just maybe, you’ll find that one person in the world that gets you.   That one true love of your life.

Of course, from frame one, it’s clear that Tim (Chris Messina) and Janice (Jenna Fischer) are destined to fill that role for each other, so all of the manufactured complications in between just seem like time wasters.  Especially Topher Grace’s character.  Sorry, caricature.  I mean, just look at him in the trailer and you’ll see that it’s impossible to take him seriously at all.

It’s a pleasant little story with likable leads and its heart in the right place, but there’s nothing that feels very original here.  It just goes through the usual romantic comedy paces without taking any real risks.   Likable but unmemorable.  Hey wait, I think that’s what it said under my yearbook photo in high school…

Roger Greenberg: Dear Starbucks…In your attempt to manufacture culture out of fast food coffee, you’ve been surprisingly successful…for the most part.  The part that isn’t covered by “the most part” sucks.

After getting out of a mental institution, Roger Greenberg (Stiller) goes to California to house sit for his brother while he’s out of the country.  Roger meets and starts up an odd relationship with his brother’s younger assistant, Florence (Gerwig), while also dealing with resurfacing feelings for an old flame, Beth (Leigh).

In every comedic actor’s life, there comes a time when they must decide to take on a more dramatic role that still has a bit of dark humor to it.  Bill Murray would be a prime example of this.  Now add Ben Stiller to that list.  Actually, he’s probably done some semi-dramatic stuff before, but this just has that late career Murray feel to it.

The problem is, Stiller’s just not quite as likable as Murray.  His anger and hostility make me wonder why any of the other characters put up with him for very long, especially Florence.  She’s a little odd herself (I don’t think Gerwig could play a totally normal character – and I wouldn’t want her to), but she doesn’t deserve the abuse she’s dealt by Greenberg.  Though, I guess that’s sort of the point.  She sees past that to the person he is underneath.  Unfortunately, it was hard for me as a viewer to see the nicer person underneath, so the romance didn’t make much sense to me.

As for Gerwig, I’ve seen her in a few things now, and I’ve enjoyed her subtle loopiness every time.  I kept wishing the movie was more focused on her, like it was for the first 5-10 minutes, but then I guess it would have had to have been called Marr…since that’s her character’s last name.

I liked Rhys Ifans’ performance as well.  I haven’t seen him in a whole lot of stuff, but he’s always brought something interesting to the table in the movies I have seen him in.  This is no exception.  It’s a more normal guy character than I think he’s known for, but he pulls it off very well.

There’s some interesting themes involved here, about stuff from your past not allowing you to move on with your life, among other things, but overall, it’s the mean spirited nature of the movie, along with a wandering storyline that brings it down a bit.  It feels like there’s a more enjoyable and interesting movie lurking just below the surface or just off screen somewhere.  What was on screen wasn’t terrible, but it has mostly vanished from my mind in the days following my viewing of it.  When I can’t quite remember how a movie ended within a week of watching it, that’s not a very good sign. 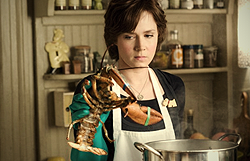 Julie: What do you think it means if you don’t like your friends?
Sarah: It’s completely normal.
Eric: Men like their friends…
Sarah: We’re not talking about men!  Who’s talking about men??

Julie (Adams) decides to cook every recipe in Julia Child’s first cook book within 1 year.  Plus, she’s going to blog all about it.  Meanwhile, we see Julia Child as she first learns to cook in Paris, and then as she struggles to get her first book published.

Let me start by saying that I’m not that into food or cooking.  If something takes more than 15 to 20 minutes to prepare, it’s usual not worth it, that’s what I say.  I thought that attitude might hinder my enjoyment of a movie all about cooking and food, but I was wrong.  Instead, I found it all to be quite enjoyable.

It helps that I’m an Amy Adams fan and that Meryl Streep is charming even when she’s using a voice that would start grating on my nerves around the midway point.  Plus, even though the film has that Nora Ephron sense of non-reality throughout it, there’s still a sense of believability to everything.  It never gets too Hollywood.  You’re expecting them to throw in a finale where Julie gets rich, moves into a mansion, and becomes best friends with Julia, but that didn’t happen in the real life story, which thankfully means it doesn’t happen here.

The only real problem I’ll point out, besides Julia’s voice, is that in the middle there are a few scenes that seem extraneous and tend to slow the movie down.  It’s over 2 hours long, and I think a few of those scenes, like the sister’s wedding, could have been eliminated without taking anything away from the movie.  This probably contributed to me enjoying Julie’s story line more.  Although, I’m sure the fact that she’s setting up a blog, wondering if anybody will ever read it, and then rejoicing over her first comment had something to do with it too.  I could identify with some of those feelings.

A funny script, entertaining performances, and nice cinematography.  These are the key ingredients necessary to cook up a fine movie.  And with that, I’m sure I’ve become the 500th reviewer to make such a food related joke about this movie.  And for that…I am sincerely sorry.