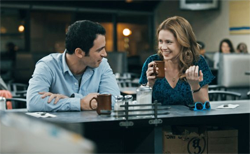 I wish I liked this movie more.  I wish the supporting characters hadn’t been so unbelievable.  I wish some of the situations and plot developments hadn’t felt so forced.  I wish it had more of an emotional core.

The central idea is a nice one – slow down, stop trying to chase material things and focus on bringing a little happiness into a fellow human’s life.   And maybe, just maybe, you’ll find that one person in the world that gets you.   That one true love of your life.

Of course, from frame one, it’s clear that Tim (Chris Messina) and Janice (Jenna Fischer) are destined to fill that role for each other, so all of the manufactured complications in between just seem like time wasters.  Especially Topher Grace’s character.  Sorry, caricature.  I mean, just look at him in the trailer and you’ll see that it’s impossible to take him seriously at all.

It’s a pleasant little story with likable leads and its heart in the right place, but there’s nothing that feels very original here.  It just goes through the usual romantic comedy paces without taking any real risks.   Likable but unmemorable.  Hey wait, I think that’s what it said under my yearbook photo in high school…

of course you can trust me...don't I just scream TRUST?

Norma: Don’t forget to turn off the tree lights.
Arthur: Nah, I like leaving ’em on.
Norma: It’s a fire hazard.
Arthur: But it keeps the Christmas spirit alive while we sleep.
Norma: We could die.
Arthur: Everybody dies, Norma.
Norma: Fine, leave ’em on.

A mysterious man shows up at Norma (Diaz) and Arthur’s (Marsden) doorstep with an interesting proposition.  If they push the button on the box he’s given them, they get $1 million…but, somebody they don’t know, somewhere in the world, will die.

This movie felt like what you’d get if Alfred Hitchcock and Stanley Kubrick directed an episode of the X-Files together.  Unfortunately, it also is a microcosm of the entire X-Files series.  It starts off well, with a good aura of foreboding and sense of mystery.  Then it starts to get convoluted and confusing and over-dramatic.  Finally, the end is just silly and frustrating.

Also, I can’t help but feel that Diaz and Marsden weren’t the best choices for these roles.  They don’t have much chemistry together, and I never believed them as a couple or as people dealing with such a bizarre situation.

I’m starting to think that the awesomeness that was Donnie Darko was just blind luck for writer/director Richard Kelly.  He’s turning into a bit of a one hit wonder.  Movies don’t have to be crazy complicated and mysterious to be good.  The dialogue and the characters can be very important keys.  That’s what The Box is lacking:  good dialogue and interesting characters.  I didn’t find anybody interesting, so once the plot started getting revealed (or not revealed as it may be), there was less and less to maintain my interest.

I liked the atmosphere Kelly built, it was similar to that creepy feeling Donnie Darko had, but it lacked the charm of that movie.  The Box starts well, then just sort of sits there, and finally grinds down to a conclusion that will leave you, and the characters, wondering what just happened.

Beware strange men asking you to push their buttons.

10 – 2.5 for the convoluted, confusing ending – 1.2 for no interesting characters or chemistry between the leads = 6.3