wait…this is a Disney World map…

Basically, if you like Wes Anderson movies, I’d say it’s worth a watch.

But I wasn’t totally blown away by it.  There are some truly great moments, but there were also times when I felt like it was dragging a little bit, even though it’s only an hour and a half long.

The performances by the adults were my favorite aspect of the movie.  Edward Norton in particular is great as the geeky Khaki Scout leader, Bruce Willis does a nice job as a sad police officer, Tilda Swinton and Jason Schwartzman have funny guest roles, while Bill Murray and Frances McDormand work well as an unhappy lawyer couple stressing over their young daughter’s behavior.

That daughter is played by newcomer Kara Hayward, and the boy she runs away from home with is another newcomer played by Jared Gilman.  I have to admit, I wasn’t too impressed with either of them as far as their ability to deliver Wes Anderson’s deadpan dialogue.  They seemed a little uncomfortable with it, and I found that distracting.

I did like their romance story, even if it did get a bit awkward at times.  I mean, usually when people film 12-13 year old kids in their underwear, making out, they get in trouble with the law…

I still find myself wishing Anderson would stick to movies that feel a little more grounded in reality, like the two that remain my favorites – Bottle Rocket and Rushmore.  His more over-the-top moments don’t always work for me, and this movie does have a few over the top moments.

Keep in mind, though, the first time I saw The Life Aquatic with Steve Zissou, I was pretty lukewarm to negative about it, but on a subsequent viewing, I liked it a lot more.  Maybe when I see this one again, my fondness for it will grow.  For now, I can recommend it mainly for Norton, Willis, Swinton, Schwartzman, and some moments of truly inspired humor.  Maybe after some more viewings I’ll be able to recommend it more for the overall story as well. 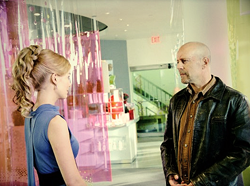 hi, yes, I don't suppose you have any tall, pink shower curtains in stock, do you?

Woman: Agent Greer, we’re not doctors.
Tom Greer: Honey, I don’t know WHAT you are.  I mean, for all I know, you could be some big fat dude sittin’ in his stem chair with his d*** hangin’ out.

In the future…at some point…a technology has been perfected which allows most of the population to stay home while living life through a “surrogate”, or human-like robot that they control.  This allows people to take chances without being injured, and it decreases the spread of disease and sickness.  When a weapon is discovered that can not only destroy a surrogate, but also kill the human controlling it, agents Greer (Willis) and Peters (Mitchell) must track down the killer who has been using it.

It’s always a shame to see an interesting premise being forced into the background of a movie by routine plotting and routine action sequences.  I’d much rather see the day to day implications of living your life through a robot rather than the convoluted action plot that is on display here.  We see glimpses of that, with Greer longing to see his wife’s actual face rather than that of her surrogate, as well as in the few scenes showing how people can live a little more uninhibited when they don’t have to worry about jeopardizing their health and safety.

There’s also a few lines here and there devoted to the idea of people losing their uniqueness and individuality, but that’s just in between the gun fights and chases when there’s time.  I can’t discuss one of my main problems with the end of the movie without giving away too much, so I’ll just say, if you’d rather not read spoilers, just stop reading now.

Okay, for those who are still here.  In the end, Greer is faced with the chance to do away with all the surrogates while not harming any of the humans.  Since he’s been forced to live without a surrogate, he’s gained a new appreciation for what it’s like to live life as himself, so this is what he wants.  He wants humanity to wake up!  So, bam, he takes the opportunity and allows all surrogates to be fried.  Get up everybody, get out and live your own lives!  Oh…but…a big sorry to all you disabled people who were able to virtually walk through your surrogate.  No more fun and freedom for you.

Yeah, the movie doesn’t even start to tackle that positive use of surrogates.  Or, if it did, it was so quick that I missed it.  Greer’s actions are supposed to be heroic, but who is he to make such a decision for everybody?  Obviously this was something most people enjoyed and benefited from in some way, so how is he a hero for destroying something that majorly cut down the spread of disease and majorly decreased crime?

Though, maybe Greer’s not meant to be a hero.  Maybe he’s just a guy who did what he thought was right at the time because he was so sad about not being able to see his actual wife for so long.  The point is, the movie doesn’t ever delve deep into the issues at hand.  It’s a short movie, at 89 minutes, and they clearly didn’t want to waste time on many philosophical discussions when there were helicopters to crash and robots to zap with electronic guns.

It would be pretty cool to be able to just remotely disengage from your surrogate whenever you get bored with a conversation.

10 – 3.5 for not exploring all the interesting possibilities presented with such an interesting premise – 1 for routine plot and action sequences = 5.5