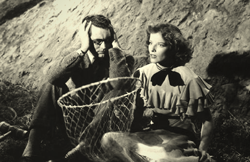 wait, I have an idea! I saw Curly do it once!

David Huxley (Grant) is a paleontologist waiting to receive the last piece of bone that will complete a dinosaur skeleton at the museum he works at.  He’s also supposed to be getting married the next day, but that all gets put on hold when David meets Susan (Hepburn).  He can’t stand her, but she likes him, so she keeps doing things that keep them in close contact, including enlisting his help in transporting a live leopard.  The high jinks is elevated when the leopard escapes.

I didn’t enjoy this Grant/Hepburn pairing as much as I enjoyed Holiday.  I think there were two main reasons for my less enthusiastic reaction.  One, I like Grant more as a suave, smart aleck sort of guy, rather than the whiney, goof-ball he played in this movie.  Two, instead of fun, back and forth banter, we get more angry, annoyed exchanges that just started to wear on my nerves after a very short time.  I would have liked to see Hepburn being less manic, and more cleverly conniving.

There are certainly some funny moments, especially Hepburn’s moment near the end where she fools the police into thinking she’s the ring leader of a criminal gang.  But, a lot of the slapstick type humor seemed on the level of The Three Stooges, which just didn’t appeal to me.  I didn’t believe how dumb the police were, and I didn’t really believe the mistaken identity moments.

David’s fiancée is just the usual throw-away movie fiancée that we know he’s not going to end up with.  That alwasys frustrates me in a movie.  Compare this with the way Holiday played out.  I didn’t know who Grant would end up with at the end of that movie.

Overall, I liked some of the banter and a few of the comedic situations, but for the most part, it wasn’t nearly pleasant enough for my tastes.  Too much arguing, too much anger.

The key to a man’s heart is to steal his golf ball, steal his car, steal his clothes, and be generally as annoying as possible until he finally sees the light and falls in love.