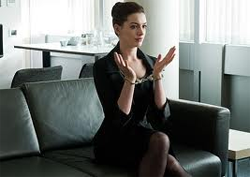 I probably don’t need to say much about this one.  Just go see it.  If you’re at all a fan of the first two in the trilogy…just go see it.

I will say, I thought a couple of elements of it were quite predictable and maybe shouldn’t have been played up as much throughout the movie.  It didn’t really ruin my enjoyment, but I was a little disappointed about how soon certain things became obvious.

My main complaint about the Dark Knight, as compared to Batman Begins, was that it was lacking in any real emotional depth.  Even Rachel’s death was hurried past without much time to mourn her.  I don’t think we even saw a tear from Bruce Wayne.  This movie felt more like Batman Begins in that regard.  It took a little (but still not enough) time to slow down and show some emotion.

But…maybe that’s why other plot elements felt rushed.  Time passes in this movie so fast that it’ll make your head spin.  There are times when we only realize that several months have passed between scenes because one character clumsily mentions it to another character.  I’m hoping an extended cut appears on blu-ray some day.  Maybe a few of the “but-how-did-he…?” moments can be clarified.  Even if it takes 3 and a half hours to do it.

All in all, it’s a satisfying conclusion to this trilogy, despite the fact that I thought the end could have been even more conclusive than it was…

hold still, I'm gonna pick you up by your head.

Claire: Anyways, these aren’t my normal office hours.
Eric: Well, I’m not a patient.
Claire: Nooo, you’re just a creepy guy standing at my door in the middle of the night.
Eric: A lovely man…intriguing.
Claire: Ok, goodnight.
Eric: You don’t think so?
Claire: I’m not going to stand here and debate your loveliness.

After a plane crashes and only a handful of people survive, Claire (Hathaway) is assigned to the group as their grief counselor.  When she gets differing stories on what happened before the crash, and some of the group members seem to mysteriously disappear, Claire begins to wonder if the airline is covering something up.

“When I grow up, I want to be an M. Night Shyamalan movie!”  That’s what I felt like this movie was screaming throughout its running time, especially at the end.  I don’t want to say anything spoiler-like, but I’d be remiss if I didn’t mention that I hate twist endings that render the rest of the movie as essentially pointless.  Especially when it’s a pretty dumb ending.  Which this was.

It felt like a waste of some quality actors as well.  Hathaway and Wilson were both fine, but then you’ve got David Morse, Dianne Wiest, Clea DuVall, and Andre Braugher all in smaller, one-note roles.  I suppose Morse fared the best out of that group, with a creepy-turn-sympathetic role, but for the most part, this was Anne Hathaway’s show.

I will say that, after I adjusted to the silliness of the big twist, there were some legitimately touching moments in the last few minutes of the movie.  I just had to put it out of my mind that it wasn’t making much sense and enjoy it for what it was.

Still, it’s hard to say that a movie is worth watching when the entirety of it is just there to set up one final concept.  Especially when the set up is dark, slow, and riddled with almost non-stop moody piano music.  Atmosphere does not equal interesting!  There needed to be better dialogue and more well developed characters.  And less piano music!

Belinda Carlisle may have been right…

10 – 2 for not having very well written characters and dialogue – 2 for that silly ending twist – .7 for all the piano music and dark atmosphere = 5.3 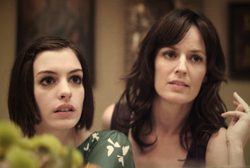 Carol: I have a Diet Coke for you.
Kym: I prefer Pepsi…from the fountain.

Kym (Hathaway) gets to come home from rehab for the weekend in order to attend her sister’s wedding.  As they prepare for the celebration, family turmoil comes bubbling to the surface.

Anne Hathaway got a lot of praise for her performance in this movie, and I can see why.  She really does manage to become Kym and not just Anne Hathaway playing a part.  I was impressed with the way she could go from being downright hateful with her family to suddenly being really vulnerable and meek in her twelve-step meetings.

The underlying story here is quite moving and watchable.  I liked the slow reveal of the family tragedy that was the source of all the strife on display.  My problem with the movie comes with all the other stuff.  The 20-30 minutes of toasts and music bogs the movie down to a snails pace.  I wanted to see if, and how, the family would work things out, but my patience wore very thin as I watched what seemed like family movies of a wedding filled with people I’ve never met before.

If you can stand all of that, or just fast forward through it, then this movie will prove to be pretty enjoyable.  Though, it can be tough to watch at times with all the awkward and uncomfortable scenes.  But that’s family I suppose…