Since it is hard to classify this as an actual movie (see the trailer), I’m not going to use my normal review format.  I’m just…going to type for a while.  That seemed to be the plan of the director of this “movie”, to just…film for a while…and hope that his actors eventually spoke lines resembling what, I assume, was written and that the special effects added later would fill in some of the other gaps.

Unfortunately, the not-so-special effects are major gaps themselves. 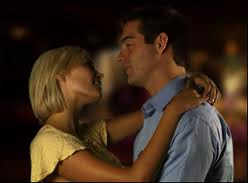 I love a guy with a small carbon footprint...

This is one of those times where you’re just not sure if the makers of the movie were trying to make a serious movie or if they were just having fun making something that they knew was terrible.  It’s hard to imagine anyone could make something this bad without it being on purpose.

That being said…I fear that this was an honest attempt at a movie.  I hope I’m wrong, but there is evidence to support my theory.

First of all, it’s not trying to be a comedy.  Most movies that know how cheesy and low budget they are tend to throw in a lot of attempted jokes.  Unless their plan was one long ironic joke, then there are no real attempts at humor here other than our hero’s sex-obsessed friend’s occasional inappropriate remark.  Also, the whole movie seems to be one long cautionary tale about being environmentally conscious and living in peace with others.  Yes, one character does utter the line, “why can’t we all just give peace a chance, ya know?”  Plus, the website imaginepeace.com is prominently displayed in several scenes.  It’s no wonder they were able to use an instrumental version of the song Imagine in the movie.  Yoko Ono seems to be the creator of, or at least heavily involved in, Imagine Peace.

My guess is that Imagine Peace wanted to make a little horror movie to act as a conveyance for their heavy handed environmental message, so they hired a novice director and some inexperienced “actors” (aka automatons that will robotically read whatever lines are fed them) and threw this junk together one week.

Make no mistake, though, it is hilarious junk.  Whether it was meant to be or not, it’s as fun to watch as The Room or Troll 2.  In fact, Troll 2 looks competently directed and edited compared to this movie.  Sound levels change wildly when switching from one angle in a scene to another, some scenes have no sound at all, and often actors deliver lines and then just look around like, “is the scene over?”

coathangers are useless against imaginary eagles...

And then there’s the birds.  The eagles are fighting back against all of our pollution and our starting of forest fires and our corvettes and candy-eating, and etc etc.  Their main tactic in doing so is dispatching hundreds of really horrible computer animated versions of themselves to swoop in and slice people’s throats.  Or, alternatively they will dive bomb buildings around the city (with airplane sound effects included) and cause huge explosions that can be seen a mile away.  Of course, other times their dive-bombing results in merely a cracked window on a car, so I guess it just depends on how much speed they can achieve before impact…or how much fuel they have in their tank?  Who knows.

I do know that the birds only show up about 35-40 minutes into the movie.  The first portion is spent establishing the complete lack of personality featured in all of our stars.  There’s Rod, a hot shot salesman at a…company of some sort, and then there’s Natalie, a model who has just landed a big gig with Victoria’s Secret.  I will say this for the movie – Natalie is definitely believable as a lingerie model.  She is quite the attractive one.  And she’s possibly the best actor in the movie as well, though it’s hard to tell when everybody is reading such horrible lines.  This interview with the actress, Whitney Moore, actually sheds some light on how this movie came to exist.  It’s funny, go read it. 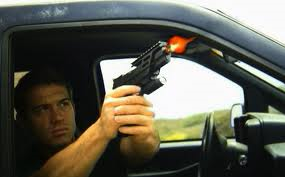 I could go on and on about this movie.  It seems like it would be fun to just break it down scene by scene.  For instance, I just loved the scene where our heroes are fending of a bird attack on the side of the highway with various firearms, including an automatic assault rifle, while a bunch of other cars are just streaming by in the background, business as usual.  I wonder how many near accidents were caused by people slowing down to see why people were running around with machine guns on the side of the road, firing up in the air at imaginary birds.  Though, I guess people might be used to that in California.

To sum up, if you like horribly, comically bad movies, you will not be disappointed by Birdemic.  You will roll your eyes at all of the preachy environmental talk, but it’s worth it just to see those eagles do their thing.  And be sure to watch all the way til the poignant final scene where the eagles mysteriously fly back from whence they came…the ocean.  The ocean?  I guess eagles live out on Eagle Island in the Pacific Ocean.  See?  Learn something new every day. 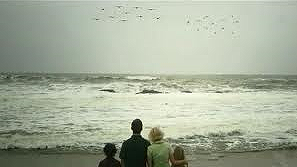