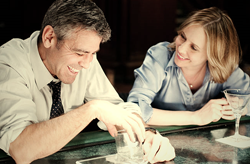 Ryan Bingham (Clooney) spends most of his life flying from city to city, firing people for companies who, as Ryan says…well, aren’t brave enough to do it themselves.  When his loner lifestyle is threatened by new technology that won’t require him to fire people face to face, Ryan takes the young developer of this technology, Natalie (Kendrick), on the road with him.

Finally a movie that lived up to the hype.

There’s nothing much new about the idea of a character that lives an isolated life, devoid of any deep, solid relationships having their life invaded by somebody who breaks down their walls and shows them that there’s some worth in close relationships.  But, if you take a familiar story, tell it well, and throw in a bit of a twist on it, you can have yourself a fine little movie.

It also helps if you can get good performances from the actors involved, and that’s the case across the board here.  Clooney and Farmiga are particularly good, but Kendrick holds her own with them too.  Bateman’s not doing anything he hasn’t done before, but he’s funny and likable as always.  Then there’s the myriad of other small parts featuring people like J.K. Simmons, Zach Galifianakis, Melanie Lynskey, Sam Elliot, and Danny McBride.  They’re all good.

The more I think about this movie, the more I’m torn on which character’s line of thinking I’m in agreement with.  Obviously having close relationships is important, but the hypothetical backpack (which contains the weight of all your possessions and relationships) Ryan keeps referring to is awfully tempting to lay aside at times.  It can weigh you down.  Ryan’s main goal in life is acquiring frequent flier miles.  For him, moving is living.  Even if he’s not moving towards any destination in particular.  As he grows closer to Alex (Farmiga), a woman he meets in an airport, you start to see a possible desire to maybe grow roots.  Maybe.  But by the end…well, as I said, I left being a bit torn…

This and Juno are the only movies I’ve seen that were directed by Jason Reitman (still need to see Thank You for Smoking), but I’m fast becoming a fan of his style.  It’s fun and creative and amusing without being overbearing or cutesy.  The editing, direction, and music add nice touches to both Juno and Up in the Air, but Reitman lets the actors carry both films.

It’s odd to leave a film feeling both depressed and simultaneously uplifted, but that’s how I felt after this one.  I think that’s another sign of a good movie.  It doesn’t tie everything up neatly with a bow on top, and it leaves you with questions on your mind.  Sort of like how the various characters we see getting fired leave their meeting feeling.  Depressed, wondering what’s next, but maybe also feeling some hope for a new beginning.

When going through airport security, always get behind the Asian people.