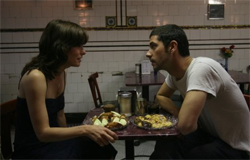 do you think this t-shirt is too dressy for this restaurant?

Jean Paul: Most people are together just so they are not alone, but some people want magic.  I think you are one of those people.

Nora (Posey) has been through a long string of failed relationships and doesn’t think she’ll ever find a one true love.  She meets Julien (Poupaud) and reluctantly starts spending time with him and finds herself growing to like him a lot.  Then Julien has to go back home to France, leaving Nora contact information, which she promptly loses.  Will she assume it’s another missed opportunity, or will she have the courage to go pursue the guy she thinks might just be ‘the one’?

Well, it’s been a week since I saw this and I’ve already forgotten just about everything about it.  That’s probably not a good sign.

It’s a fairly basic movie about how un-fulfilling it can be to be in a superficial relationship just for the sake of being in one.  Nora sees what other couples have, or seem to have, and assumes she’s a broken person because she can’t achieve that same type of relationship level.  Then she falls for the Frenchman, he leaves, and she has to decide what to do next.

That’s pretty much it.

Posey’s performance is good and likable, but the movie isn’t all that funny or charming or even romantic.  It was late at night when I watched this, and I was tired, but that wasn’t the only reason I wanted it to end.  There just wasn’t anything in it that grabbed my attention.  None of the characters, none of the writing, none of the music, and not the direction either.  It all just sort of lays there.

If you can’t find a mate here in the U.S., try France!