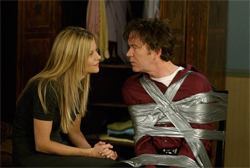 I couldn't afford to follow you to Paris this time...

Ian: Louise, I hate you and think you’re a psycho and I’m gonna have you jailed or institutionalized!
Louise: That’ll be pretty hard to do when you can’t even move an arm.
Ian: I mean EVENTUALLY!

When Louise (Ryan) returns home earlier than expected and finds that her husband Ian (Hutton) is in the processing of leaving her for another woman, she decides to hold him hostage until he realizes he’s still in love with her.

I never really believed the whole set up, though.  Why?  Maybe because I didn’t feel like I knew anything about Louise.  I wanted to know some background on her that would make me realize that she’s the kind of person who is capable of snapping like this.  Perhaps something that would make her a little more sympathetic rather than just plain nuts.  In French Kiss, she was likable and, even though you didn’t really understand why she wanted her boyfriend back, you still rooted for her.  And it’s not just because she was cuter back then!  Though, it’s true, I’m not a fan of whatever she’s had done to her face, especially in the lip area.

The movie was written by the late Adrienne Shelly who wrote a movie that I liked a lot, Waitress.  It’s also directed by first time director Cheryl Hines, one of the co-stars of Waitress.  Serious Moonlight is not nearly as charming or funny as Waitress, but it’s still watchable and amusing at times.  Unfortunately it’s also very very predictable.  That ruined it a bit for me.

While it’s nice to see some of Adrienne Shelly’s last writing make it to the big screen, I wish it could have been made with more skill and energy.  It’s not a bad set-up, but it’s carried out without much charm or heart – two things that Shelly brought to Waitress through, not only her writing, but her directing as well.

Always keep a roll of duct tape handy.  It could save your marriage.