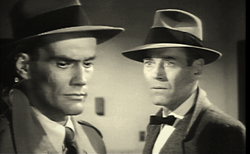 Chris Balestrero (Fonda) is mistaken for a hold-up man that apparently looks a lot like him.  Witnesses identify him, and handwriting samples are a close enough match to get him arrested.  As Chris awaits his trial, his wife Rose (Miles), believing she has failed her husband in some way, starts to suffer a sort of nervous breakdown.

This movie is based on a true story (a story which is right up Hitchcock’s alley), and you can tell that Hitchcock was going for a sense of realism here in order to get that point across.  Alfred himself gives an introduction at the beginning stating that everything in it is true, so obviously he didn’t want to do anything too fantastical that would stretch the credibility of that statement.

It was frustrating watching the evidence seemingly mount against the innocent Chris, and Fonda does a good job of looking lost and confused by it all.  Unfortunately, despite it being a truly odd situation, it didn’t make for the most compelling movie.  In Hitchcock’s hands, it’s probably as good as it could possibly be, but it definitely dragged at times.

Rose’s descent into depression and seeming madness sort of comes out of nowhere as well.  Maybe that’s how it really happened, but I would have liked to have seen a more gradual change in her and maybe more of an indication as to why such a severe effect occurred.  A whole movie focusing on her might have been more interesting.

So, to sum up, not one of my favorites from Hitchcock, but certainly watchable.  If you go into it expecting to see a frustrating situation of mistaken identity, along with a realistic, detailed depiction of how the police went about determining his guilt, you could get some enjoyment out of it.