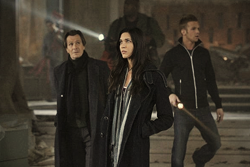 yeah, this looks moody enough...we'll have the exorcism here.

Romy: What the hell WAS that!?  One second she’s fine, then she has a bitch-flip!!

I’m not sure it really matters, but basically there’s a girl named Casey (Yustman) who is being terrorized by visions and dreams about a scary little kid.  She tries to figure out why this is happening, and I try to figure out why I’m watching.

So I decided I was in the mood for something brainless, something that required no thought to watch.  Well, I realize now that I got the opposite of what I wanted because I was still puzzling over this movie hours after having watched it.  Not just wondering why it was even made, but if it made any sense at all.  This is the kind of movie where all the actors look like they have no idea what they’re talking about or what’s going on, but they’re concentrating hard to make it seem like they do.

“Some people are doorways…”
“Yes, especially twins.  Cause what is a twin, but another kind of mirror.  And mirrors have always been doorways to the other world.”

I just wonder if sometimes after an actor delivers dialogue like that, they turn to the director and say, “wait…what am I even talking about here??”  It hardly even matters what is said in these kinds of movies.  All you need to know is that something creepy is trying to possess (or kill?) the main character.

The best I can tell, there’s some sort of entity called a dybbuk that is trapped in limbo and wants to inhabit a human.  The confusing thing here is who exactly is this dybbuk?  We see flashbacks to WW2 where Nazis (yes, they drag Nazis and Auschwitz into this mess) were doing experiments on Jewish twins.  One of the twins is the grandmother of our main character, Casey.  Her brother died in the experiments, but a dybbuk possessed him and he became evil.  His sister killed him, but then he haunted Casey’s mom until she killed herself, and now he’s haunting Casey.  But, he keeps saying “Jumby wants to be born”.  Jumby is the nickname of the twin brother of Casey that died in utero.  So is this Jumby that’s haunting her?  Is it the grandmother’s brother playing the part of Jumby’s agent?  I really don’t know.

Oh, and why WHY is it stated that it’s trying to kill her if it wants to possess her?  And why doesn’t it just possess her?  It has no problem possessing other people (jumping from body to body like the dead killer in Fallen), or killing other people for that matter.  In fact, I’m wondering why it needs to mess with her at all, seeing as how it seems to be pretty darned powerful already.  Aside from the possessing and killing, it can cause wind and power outtages and produce as many crickets from thin air as a person could ever want.

If you’re looking for positives, I guess Odette Yustman is rather easy on the eyes, and there are a couple of jolt scares.  Though, you’ve probably heard of a one joke comedy?  Well, this is a one scare horror movie.  Every supposed scare involves glimpses of the creepy kid, then a sudden close up of his face going all demonic, accompanied by jarring music.  The actors try their best, but there’s just nothing to work with.  Gary Oldman (!) actually shows up about half way through to make everybody else look bad, but he’s not given much to do until the end.  The only actor that brings any real weight and interest to his character is Idris Elba as another priest who assists on the exorcism at the end.  Of course, he’s soon turned into basically a zombie from 28 Days Later.

Speaking of that exorcism, the lead up to it was actually done fairly well.  It almost has a realistic feel to it, with various normal looking people gathered around, cameras rolling, flood lights, etc.  They even checked Casey’s ID to make sure she was old enough to consent to the exorcism.  It’s not as theatrical as these things are usually depicted.  But again, that is all tossed aside once the dybbuk shows up.

The final revelation at the very end of the movie is about as hard to predict as when your next birthday will be, and it did nothing to help explain the previous events in the movie.  I guess we’re supposed to say, “oh, THAT’S why it was trying to possess her.”  But I was left saying, “so why was it trying to KILL her??”

Have I made you want to see this movie yet?  If you like movies with no character development, grey scenery, low lighting, old women falling down stairs, dogs with upside down heads, kids stabbing people, and confusing dialogue, then by all means run run run to your nearest video store to rent this gem.  Then after you watch it, maybe you can explain to me what the heck was going on.

Mirrors are evil.  Break all of the mirrors in your house immediately!  Then burn(?) some parts of them and bury the rest!  Now.  Go!