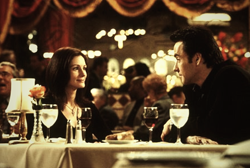 Kiki: Eddie, are you okay?
Eddie: I can feel my nose in the back of my throat.  Is that bad?

Eddie (Cusack) and Gwen (Zeta-Jones) are a famous Hollywood couple who have broken up recently due to Gwen cheating on Eddie with a Spanish co-star of hers.  Their last movie together is basically being held hostage by the editor of the film, so there’s no movie to be shown at the press junket.  In order to distract the press from this fact, Billy Crystal is hired (or re-hired really) to create the illusion that Eddie and Gwen are re-uniting.  Meanwhile, Gwen’s sister, Kiki (Roberts) realizes how much she likes Eddie.

There’s not much to say about this one, so I’ll be quick.  It’s a romantic comedy that’s hardly funny at all and doesn’t have a very convincing romance.  I like Julia Roberts, and her character is likable through most of the film, but then they suddenly make her an angry, neurotic mess at the end too for no particular reason.  I think it would be much more interesting, and believable, if she had remained a bit more in control and nice despite the circumstances.

Like I said, though, the real problem here is that the movie just isn’t funny.  The final showing of the movie, while a very unbelievable scene, manages to get a few laughs, but by then it’s much too late.