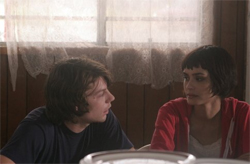 Yes...I am the guy from Almost Famous...

Zia: Who could think of a better punishment than this?  Everything’s the same…just a little worse.

Zia (Fugit) has just committed suicide and finds himself in a place, much like the world he left, filled with others who took the same route he did.  Though, in this world, there are no stars in the night sky, nobody smiles, and occassionally you’ll find a random black hole under the seat of your car.  After Zia finds out that his ex-girlfriend has also committed suicide, he sets off on a road trip with Eugene (Whigham) to find her.

I did not know what to expect going into this movie, and I was pleasantly surprised.  I thought it had interesting characters, a good story, and – for a movie where nobody smiles – quite a few amusing moments.  I’m not entirely sure what message, if any, the movie was trying to get across, but that didn’t really detract from the experience for me.

There are plenty of odd characters that Zia, Eugene, and Mikal (Sossamon) meet along the way, but thankfully none of them are too over the top, even Will Arnett as “Messiah”.  They could have easily just had him take over the movie when he showed up, but happily the focus remains on our main characters.

The topic of suicide might be a bit grim for some people, but the movie really doesn’t focus on it too much after the opening scene.  In this new world they find themselves in, the characters seem to focus more on things that are important to them and what – if anything – they miss from life.  So maybe that’s the movie’s message…