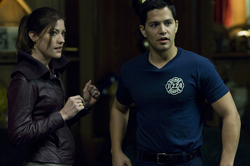 So we won't run into any zombies tonight, right? ....right??

In a remake of a, apparently superior, Spanish film, a reporter and her cameraman are shadowing some firefighters for an evening and end up going out on a call that turns into a nightmare.  Killer zombies may or may not be involved.

I’ve always liked the idea of using a hand-held camera, first person viewpoint for action or horror movies, but I still haven’t seen it pulled off to perfection yet.  There are always moments where you just don’t believe the person would still be filming instead of running for their lives.  That was a problem in Cloverfield, and it’s a problem here, though at least in this movie, it’s the job of the person filming to document things.  So that adds some credibility to it.

Also, I was hoping for something more interesting than monsters lifted straight out of 28 Days Later.  They may have well just gone ahead and called it the Rage Virus.  If the “zombies” in this movie had red eyes, they’d be nearly identical to the ones in 28 Days Later.  Though, at the end there are a couple creepier ones, but still nothing too interesting.

Also, shame on the makers of the trailer for this movie for putting the very last scene in the movie right there as the iconic shot in the trailer.  Kinda ruins the ending there, geniuses.

All that being said, there are some effectively scary and tense moments, but the overall payoff of the movie just isn’t enough for it to stick with me afterwards.  Instead of being exhilarating or interesting, it just comes off as depressing.

10 – 2 for dialogue not always sounding natural – 2 for derivative virus/zombie storyline + .5 for some scares and good effects – .8 for characters behaving in stupid, unbelievable ways = 5.7