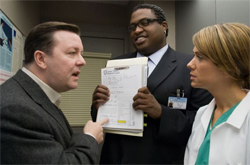 Nurse: Come back soon!
Pincus: …What a terrible thing to say in a hospital.

Bertram Pincus (Ricky Gervais) is a dentist who does not like people…at all, and keeps them all at a distance.  During a rather routine procedure in a hospital, he dies for 7 minutes and is brought back to life.  Upon leaving the hospital, he discovers he can see and communicate with ghosts that are wandering the streets of New York.  These ghosts become his tag-alongs, much to his disliking, because they want him to help them with their unfinished earth-business.  One in particular, played by Greg Kinnear, latches on and won’t leave his side until he agrees to help him break up his ex-wife’s engagement.  And of course, there’s added complications when Pincus starts to fall in love with said ex (Tea Leoni).

The movie starts off with a Beatles song, I’m Looking Through You, which automatically earns it points in my book.  At first it seemed that Ricky Gervais was playing a slightly different character than I was used to seeing him play, but he quickly slid right back into his more recognizable Office/Extras type character.   I was hoping he’d stay in the subdued/anti-social zone that he starts in, but he transitions back into the awkward guy who talks too much pretty soon.

That being said, he’s still funny, which is good because he’s really the only one providing comedy in the movie.  Everybody else seems to be there for him to play off of or react to.

The plot borrows, in theme, from The Sixth Sense and, in tone, from more serious-toned romantic comedies like Return To Me.  So, you might even shed a tear or two.

Overall, quite an enjoyable movie, and even though I won’t be purchasing it for my dvd collection any time soon, I think it could stand up to repeated viewings.

I should also mention that Kristen Wiig (from Saturday Night Live) is really good in her scenes as the surgeon who informs Pincus of his untimely, but brief, death.